1859 Indian Head Cent Good. This first copper-nickel Indian Head issue was originally called "the nickel" because at the time pennies were the only coins that contained nickel in American commerce. The composition was altered a few years later due to hoarding during the Civil War. The laurel wreath reverse is a unique one-year-only engraving found on this inaugural issue. Good quality circulated in commerce during the Civil War and Frontier era and still retains all major designs.

1869 Indian Head Cent Good. With a mintage of just 6,420,000, the 1869 Indian Head penny is an especially sought-after issue in the beloved series. Because of the Civil war, in 1864, the Indian Head cent's metal composition was changed from copper-nickel to bronze, which became the standard for the rest of the series. Good quality retains basic designs, clear dates and inscriptions. 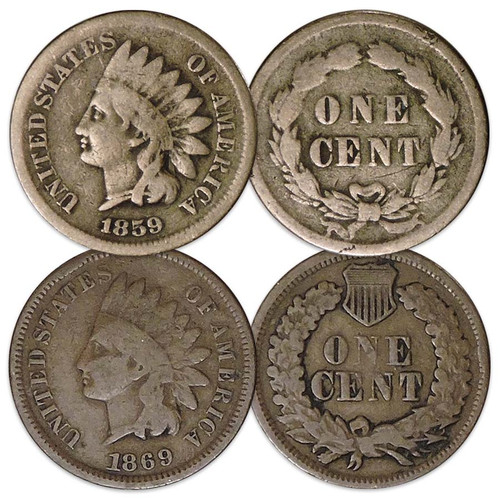