1878, 1881, 1891 & 1893 Carson City Morgan Silver Dollar Collection, Very Fine. These historic Morgan silver dollars were struck at the isolated Carson City Mint near the famous Comstock Lode in Nevada. This branch mint was the smallest U.S. mint of the time and its total outputs were the lowest of any facility. Just 2% of all Morgans were produced there. The CC-mintmark has always been especially desirable to collectors and today prized Carson City Morgan silver dollars are getting much tougher to locate in any grade.

1878-CC Morgan Silver Dollar, Very Fine. Of the first-date 1878 Morgan issues, the Carson City is the most elusive today in our nicely detailed Very Fine quality or higher grades. It was a day's pay for a cowboy on the range. Most were held in reserve and the overwhelming majority lost in U.S. Treasury silver melts of the 20th century.

1881-CC Morgan Silver Dollar, Very Fine. Its mintage of 296,000 was easily the lowest in the first seven years of the Morgan series. The 1881-S Morgan mintage was over 40 times higher! Most of the newly struck coins were stored by the Treasury and released a generation later. Thus, in circulated grades, this issue is one of the scarcest in the series. It's estimated that only one circulated specimen may survive for every 50 mint-state issues.

1891-CC Morgan Silver Dollar, Very Fine. The 1891 Carson City issue had a far lower mintage than the year's Philadelphia, New Orleans and San Francisco individual outputs and remains the key scarcity for the date. We offer nicely detailed Very Fine quality that circulated in the Old West as the Frontier Era ended.

1893-CC Morgan Silver Dollar, Very Fine. Only 677,000 were struck by the Carson City Mint in 1893, before it closed after a scandal involving employee theft. Perhaps fewer than 20,000 of this elusive issue survives today in our nicely detailed Very Fine quality or better. It's the second rarest Carson City Morgan. 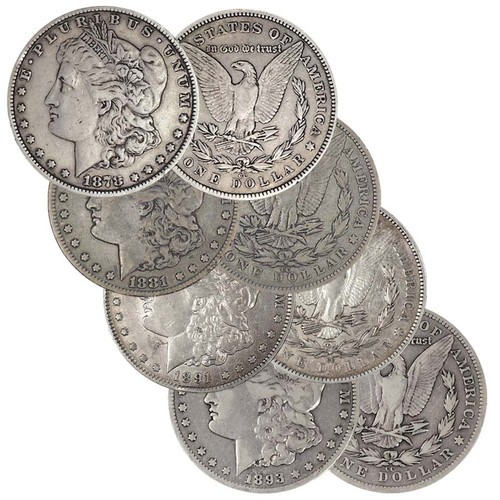