The most famous change in the Morgan silver dollar series came shortly after its initial release in 1878, when an ornithologist contested the design of the eagle's eight tail feathers. In the end, four different varieties of Philadelphia Morgans were struck that first year. This collection includes all four varieties in nicely detailed Very Fine quality.

1878 Seven Tail Feather Morgan Silver Dollar. The second variety was issued with seven tail feathers; all subsequent reverse engravings in the series featured the odd number of feathers. The eagle features a Flat Breast and parallel feathers on the arrow it clutches.

1878 Seven Over Eight Tail Feather Morgan Silver Dollar. During the transition from the initial reverse design to its revised version, a number of eight tail feather dies were over-punched with the newer seven tail feather hub. The new image did not totally cover the old, resulting in the seven over eight variety, which is even more scarce than the first eight feather type.

1878 Round Breast Third Reverse Morgan Silver Dollar. The final variety came about when the Flat Breast type was revised to a Rounded Breast and also featured slanted feathers on the top arrow instead of the parallel feathers. This reverse engraving became the standard enduring design. 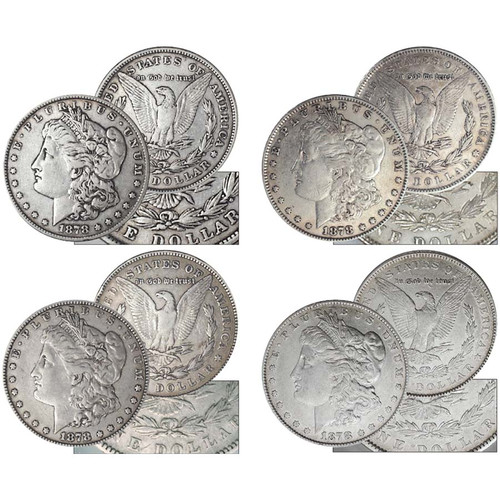