1879-CC Carson City Morgan Silver Dollar Very Fine. In only the second year of the series, just 756,000 Morgans were output for commerce by Carson City in 1879; for that same date Philadelphia, New Orleans and San Francisco produced silver dollars into the millions. Mint-state issues can easily sell for five figures, which puts added collecting pressure on circulated grades. Today, expert opinion holds that as few as 1.5% of the 1879-CC's original mintage may survive in the Very Fine quality we offer here or higher grades.

1881-CC Carson City Morgan Silver Dollar Very Fine. Until 1885, the 1881-CC's puny mintage of 296,000 silver dollars was the lowest of the Morgan series. That same year, the San Francisco Mint produced 40 times as many Morgan dollars! Most of the newly struck coins were stored by the Treasury and released a generation later. Thus, in circulated grades, this issue is one of the scarcest in the series. It's estimated that only one circulated specimen may survive for every 50 mint-state issues.

1890-CC Carson City Morgan Silver Dollar Very Fine. Carson City struck 2.3 million silver dollars which was the lowest output of any mint in 1890. But with a plethora of silver dollars already in commerce much of its original mintage was tucked away in storage vaults. Today, just a small number remain as the vast majority of stored coins vanished in government melts decades later. Mint-state 1890-CC issues are hard to come by — and therefore pricey — which makes these clearly detailed Very Fine specimens an affordable option for collectors.

1893-CC Carson City Morgan Silver Dollar Very Fine. The legendary Carson City Mint struck its last coin in 1893. Before closing its doors on the production of coinage, just 677,000 silver dollars were output. Today it's the third rarest Carson City issue. Our clearly detailed Very Fine quality is elusive in its own right, but far more affordable than extremely scarce mint-state specimens which sell for five to six figures! Perhaps fewer than 20,000 pieces are extant in circulated and higher grades. 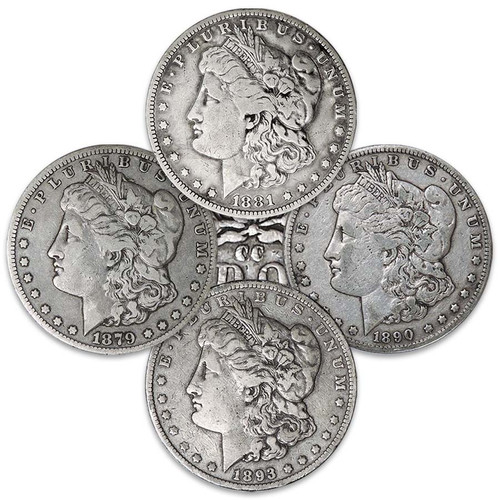