1883 Philadelphia Morgan Silver Dollar Brilliant Uncirculated. Struck by the principal mint in the first decade of the Morgan series, only about 3% of this issue's output is estimated to survive today in the Brilliant Uncirculated quality. Mintages were plentiful during the early years of the series, but many coins were held in reserve and later lost in melts during the world wars. Philadelphia mintages rose considerably later in the decade.

1884 Philadelphia Morgan Silver Dollar Brilliant Uncirculated. Morgan dollar mintages steadily rose in the 1880s when silver was still pouring out of the great Western mines. Vast quantities of this issue were later lost in government melts, making mintage numbers deceiving in relation to the actual number now surviving. Just 2% of this issue's original mintage may survive in this spectacular mint-state quality. 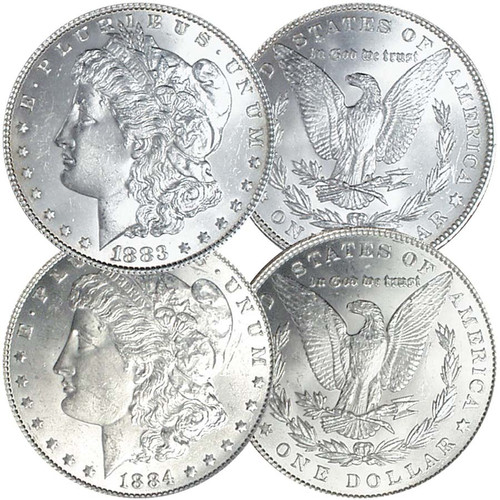