1892 Columbus Silver Half Dollar, Extra Fine. Congress authorized this historic coin for the 400th anniversary of Columbus' epic history-changing voyage. It was struck to help fund the Columbian Exposition in Chicago. This first U.S. commemorative coin was minted for two years. More than 50% more were produced the second year making this 1892 date a tougher find. The Columbus portrait was based on a statue in Madrid. Shown on the reverse is the Santa Maria and the Old and New World's hemispheres. Sharply detailed Extra Fine quality.

1925 Stone Mountain Silver Half Dollar, Very Fine. This 1925 single-date tribute to the Valor of the Soldier of the South was the most subscribed one-year-only U.S. commemorative coin until the modern series began in 1982. Profits helped fund the carving of giant Confederate soldiers on Stone Mountain in Georgia. Generals Robert E. Lee and Stonewall Jackson serve as models of Southern gallantry for sculptor, Gutzon Borglum who was later known for creating Mount Rushmore. Very Fine quality. 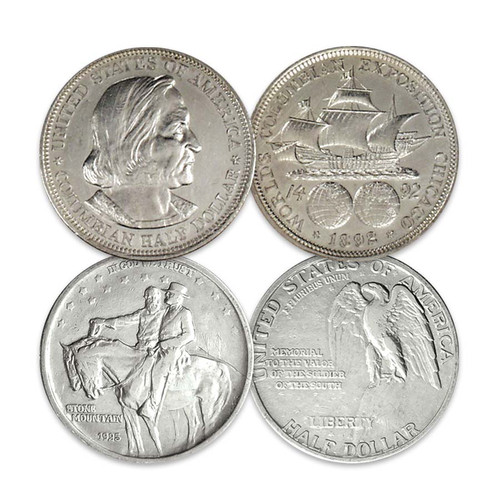