1896 Philadelphia Morgan Silver Dollar Brilliant Uncirculated. Most of the key rarities in the Morgan silver dollar series are from the 1890s, when mintages plummeted after the repeal of the Sherman Silver Purchase Act in 1893. Even when Morgan mintages began to rise again late in the decade, they remained relatively low compared to earlier production numbers. Today the 1896 Philadelphia Mint Morgan issue stands out as one of the best buys from the rare decade. The 1893-1895 BUs generally cost thousands of dollars, but the 1896 Philadelphia is easily affordable. Our Brilliant Uncirculated quality has nice original luster and no sign of wear.

1898 Philadelphia Morgan Silver Dollar Brilliant Uncirculated. The country was bustling at the end of the 19th century; Atlantic City opened its famous amusement pier in New Jersey, Goodyear Tire company was founded and the manufacturing of cars had begun. Even when silver dollar mintages began to rise again in the late 1890s, they remained relatively low compared to previous years. In BU quality, this 1898 Philadelphia Morgan is up to ten times more scarce than some 1880s issues. Our Brilliant Uncirculated specimens are as beautiful as the day they emerged from the principal mint over 12 decades ago. 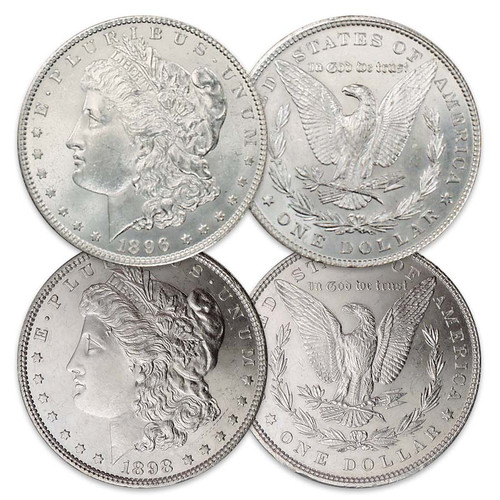