1902 Philadelphia Morgan Silver Dollar Extra Fine. When the Morgan series was suspended after 1904, a large proportion of recent mintages were placed in storage and huge numbers were later lost in government melts. Today it's estimated that less than 2% of this 1902 Philadelphia specimen's eight million mintage exists in mint-state condition — making circulated grades desirable. With this special offer you pay less for a higher grade Extra Fine specimen than you would for Very Fine grading. XF coins feature sharp details and only light wear.

1904 Philadelphia Morgan Silver Dollar Extra Fine. The 1904 Philadelphia mintage of 2,788,000 was just 13% of the Morgan series top late-1880s production. Even though the production of Morgans was suspended that year many of these issue were held in reserve and later lost in melts. Of the 2.8 million struck for circulation in 1904 by the principal Philadelphia facility just 80,000 may exist today in mint-state quality and those sell for over $300. That makes sharply detailed Extra Fine specimens like these a great choice. 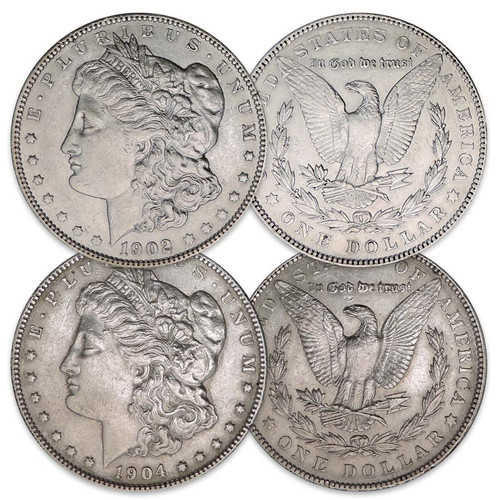