1921 Philadelphia Morgan Silver Dollar, Brilliant Uncirculated. The year 1921 saw the birth and death of the Morgan dollar; the last of its kind rolled off the coin presses 100 years ago. Resurrected after its original hubs were destroyed after suspension in 1904, the final year 1921 Morgan dollar's engravings differ slightly from earlier pieces issued in the lengthy series. Before the year's end, the Morgan would be replaced by the new Peace dollar. Although these specimens are now 100 years old, they are still as beautiful as the day they left the Philadelphia Mint. Brilliant Uncirculated quality.

1924 Philadelphia Peace Silver Dollar, Brilliant Uncirculated. These silver dollars were planned as a tribute to the restoration of peace after World War I. The Peace dollar proved to be the last 90% silver dollar issued for U.S. commerce. This 1924 no-mintmark Philadelphia issue's output was 20% less than the peak mintage of 1922. Comparatively few were withheld from commerce by banks and the Treasury, or saved by collectors. Nearly a century later, just 6% of surviving specimens remain in original mint-state condition; far fewer than many early Morgan dollars. 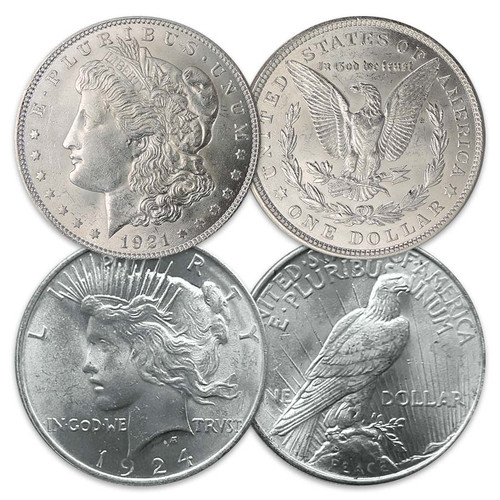