In the wake of World War I, the United States had entered the Roaring Twenties. With a booming post-war economy, many Americans were able to enjoy a comfortable lifestyle. Automobiles became commonplace, as did electric washing machines. The speakeasy and new-fangled jazz music was here to stay, as well as scandalous skirts worn way above the ankle.

The year 1921 also saw the birth and death of the Morgan dollar; the last of its kind rolled off the coin presses a century ago. Resurrected because its hubs had been destroyed after suspension in 1904, the final year 1921 Morgan dollar's engravings differ slightly from earlier pieces struck in the lengthy series and mintmarks became "micro." Philadelphia and San Francisco Morgan silver dollar pair in sharply detailed Extra Fine quality. 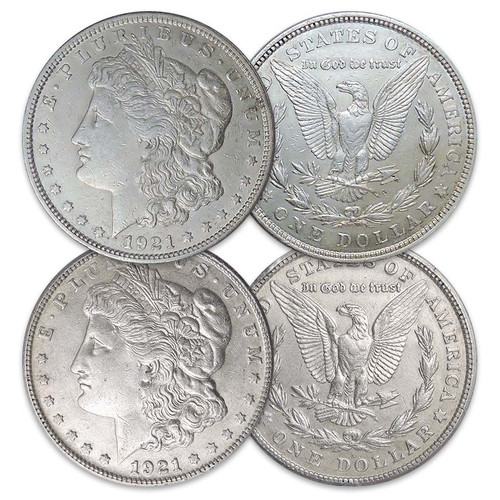