1925 Philadelphia Peace Silver Dollar, Extra Fine. As the Peace series crept closer to reaching its quota imposed by Congress, silver dollar mintages declined drastically in the mid-1920s in comparison of their peak 1921 and 1922 productions. In 1925, the Philadelphia Mint issued just 10.2 million — its lowest annual silver dollar output of the decade up to that point.

1934 Philadelphia Peace Silver Dollar, Extra Fine. In the early 1930s during the Great Depression, coin output was greatly curtailed. No silver dollars were issued at all from 1929 to 1933. Then in 1934 as part of President Roosevelt's economic recovery plan, the U.S. Treasury was again required to purchase silver bullion and strike Peace dollars. Under one million were issued by Philadelphia, which was the lowest output in the final two years of the series. 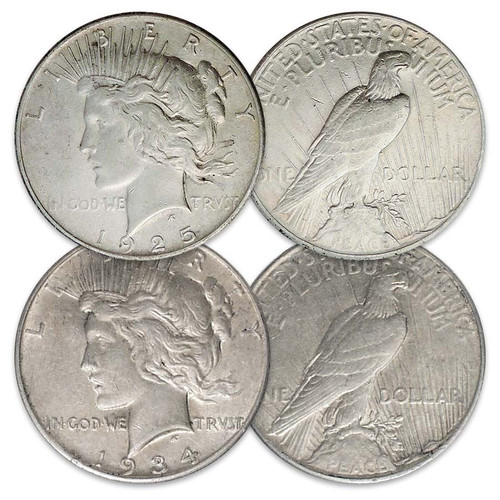