1948 Franklin Silver Half Dollar, Very Fine. Half dollar mintages have generally been the lowest of America's circulation coinage. For example, only one of this first-date 1948 Franklin silver half dollar was struck for every ten Washington quarters and every 23 Roosevelt dimes! Between the Philadelphia and Denver Mint, just over seven million 90% Franklins were struck; later individual mintages in the series would reach as high as 67 million! Nicely detailed Very Fine quality. Our choice of mintmark.

1957 Roosevelt Silver Dime, Brilliant Uncirculated. Since its inception, the U.S. Mint had always issued 90% silver coins as a hard-asset foundation for the American economy, but in the 1960s the market price of silver began to exceed the face value of circulating coins. U.S. coins with silver content were last issued for commerce in 1964; in subsequent years, the precious metal was reduced or replaced entirely. These days, silver Roosevelt dimes are rarely found in pocket change due to their double dynamic of silver and numismatic value. This vintage 1957 Roosevelt silver dime is still as beautiful as the day it left the mint. Our choice of mintmark. 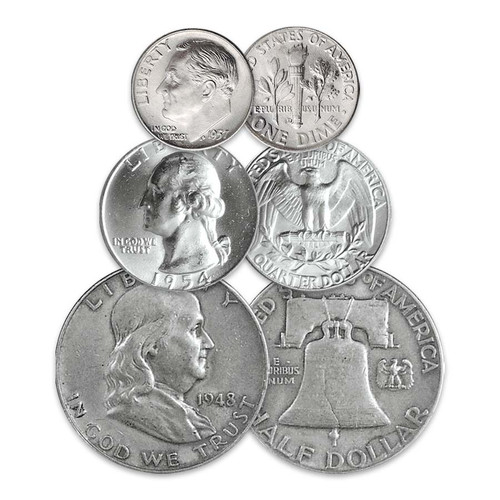