1953 Philadelphia Franklin Silver Half Dollar Brilliant Uncirculated. Just 2,668,120 of these 90% silver half dollars were output in Philadelphia nearly 70 years ago and would turn out to have the second lowest mintage of the series. The Franklin series is a collector favorite as all issues contain silver content and there are a limited number needed to compile a complete set.

1963 Philadelphia Franklin Silver Half Dollar Brilliant Uncirculated. Congress authorized the Franklin half dollar in 1948 with the expectation that it would be issued for at least 25 years. Following the assassination of President Kennedy in 1963, Congress quickly approved a new half dollar in his honor, abruptly supplanting the popular Franklin series. This 90% silver half dollar is as beautiful as the day it left the Philadelphia Mint almost six decades ago. 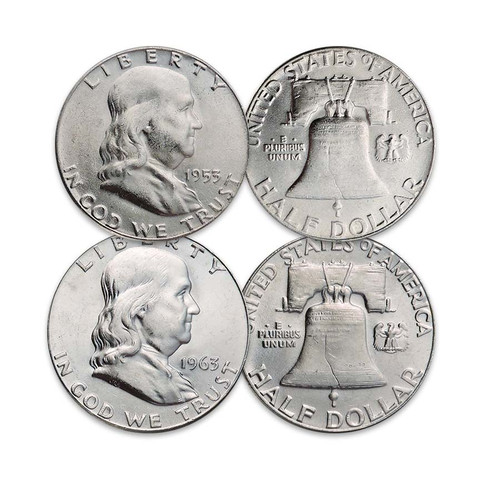