IMPORTANT INFORMATION: To help slow the spread of COVID-19, the state of Vermont has greatly limited the scope of nonessential businesses until April 15th. Currently, ICC is only able to ship a limited number of orders. You may also experience additional delays due to supply chain limits and order volume. We apologize for the inconvenience and thank you for your continued support.

1960 Mint Set. Merely 260,485 were issued, the second-lowest U.S. mint set output since that date (only the 1961 mint set had a smaller production in that span). Later mintages in the series were up to 20 times higher. The set includes pristine Brilliant Uncirculated specimens of every U.S. coin for the date: both Philadelphia (no mintmark) and Denver (D mintmark) issues of the cent, nickel, silver dime, silver quarter and silver half dollar. Mint medals for each packet.

1964 Mint Set. This was the last year when all circulation U.S. dimes, quarters and half dollars were struck with the traditional 90% silver content. Included are Brilliant Uncirculated specimens of both the Philadelphia (no mintmark) and Denver (D) cents, nickels, dimes, quarters and half dollars (the first Kennedy issues). This relatively scarce set's mintage of 1.0 million was less than half that of the next 1968 U.S. mint set. 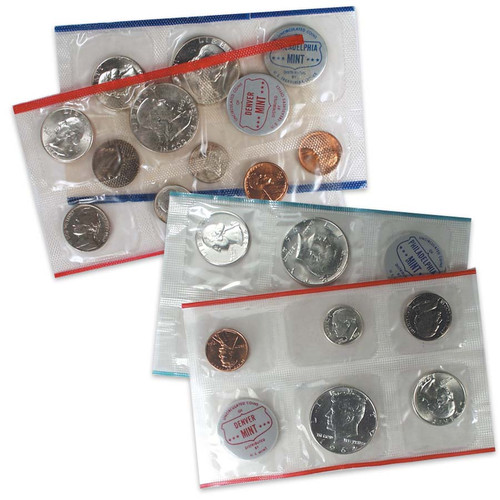