1961, 1962 & 1963 Franklin Silver Half Dollar Proof Trio. When Congress authorized the Franklin half dollar series in 1948, it was expected to be issued for at least 25 years. But in 1964 following the tragic loss of President Kennedy, the new JFK half dollar was approved. The Franklin was America's last half dollar series to be completely struck in 90% silver. Our set features the 1961, 1962 and 1963 three final dates in proof form. They were only issued as part of complete proof sets and can be tough to find separately.

1964 Kennedy 40% Silver Half Dollar Proof. Just two months after President Kennedy's assassination in 1963, a new half dollar commemorative coin was already in production. You can now own the most elusive and beautiful form of the original 1964 Kennedy Memorial silver half dollar. Only one finest-quality proof was struck for every 100 regular Brilliant Uncirculated issues minted for circulation. These superlatively minted Kennedy half dollar proofs have double-struck engravings and dazzling mirror surfaces. 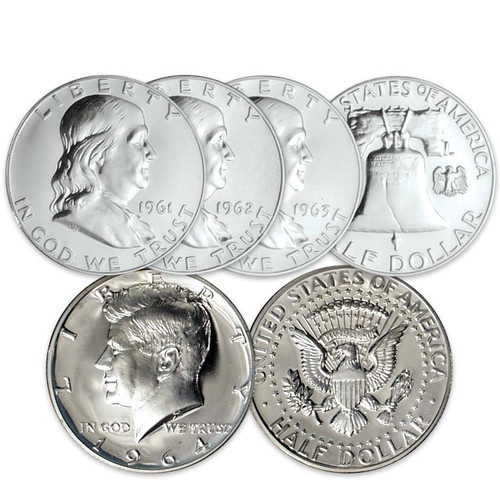