1969, 1973 & 1987 Proof Set Trio. Each of these 5-coin sets were issued over three decades ago, with outputs between 2.7 million and 3.8 million. Some early sets reached productions of over 4 million. The finest-quality proof coins in these sets were struck by the San Francisco Mint and remain in official U.S. packaging. The crisp, double-struck engravings have elegant frosted finishes, contrasted with dazzling mirror backgrounds. Included are exquisite proofs of all five U.S. denominations for each date: cent, nickel, dime, quarter and half dollar.

1972, 1986 & 1997 Mint Set Trio. Mintages for this trio of vintage sets from three different decades range from just 950,478 to 2,750,000. The 1972 set features 11 coins with specimens from Philadelphia, Denver and San Francisco. Ten coins were included in the 1986 and 1997 sets from Philadelphia and Denver. All three sets feature cents, nickels, dimes, quarters and half dollars housed in original U.S. Mint packaging. 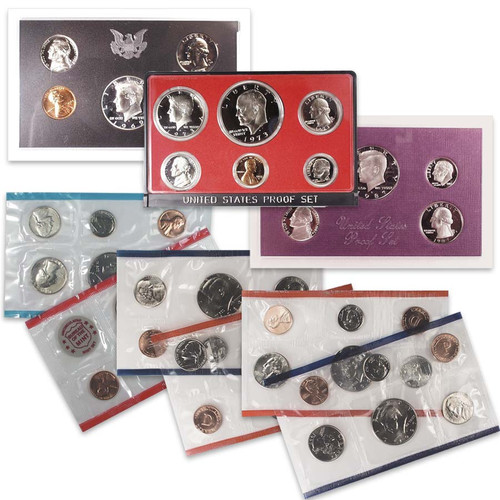