1983 Olympic Discus Thrower Silver Dollar Brilliant Uncirculated. Struck in anticipation of the 1984 Los Angeles Summer Games, this was the first U.S. 90% silver dollar commemorative produced since 1900 and the first released to the general public. From that point on the silver dollar became a cornerstone of the modern commemorative series, which continues with great popularity today. Shown on this inaugural issue is a triple image of a traditional Greek discus thrower to give the impression of motion. Over twice as many proof issues were output making the BU a desirable acquisition.

1986 Statue of Liberty Silver Dollar Brilliant Uncirculated. Minted over 30 years ago for the Statue of Liberty's centennial celebration, this issue is immensely popular thanks to its status as one of the first of America's modern commemorative coins. Made with 90% silver, this big silver dollar features an image of the Statue of Liberty in all her splendor with the main building of Ellis Island in the background and lines from Emma Lazarus' poem, The New Colossus. Every silver dollar collector should own this wonderfully patriotic specimen. 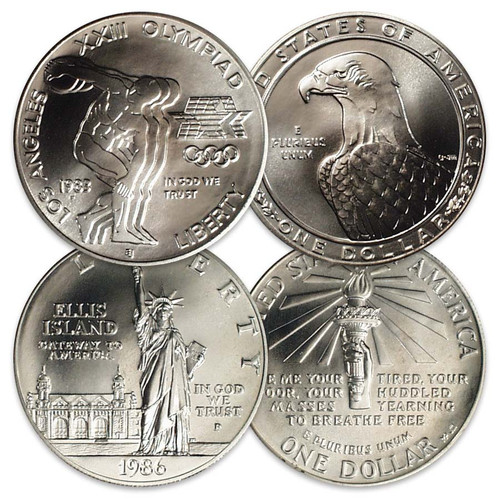