1986 Proof and Mint Set Pair. Both of these notable U.S. coin sets are now 35 years old and each had especially low mintages for their time. The coveted 5-coin 1986 proof set had a total mintage of just 2,411,180. That's the smallest output for any regular U.S. proof set in the three-decade span from 1961-1992. With a production of just 1,153,536, the 10-coin 1986 mint set had the lowest output in the date span from 1968-1994. Far fewer of either set remain intact today as compared to official mintage numbers. Many have been broken up for single coin issues.

2010 Proof and Mint Set Pair. Issued over a decade ago, these two sets contain landmark coins and ten one-year-only designs. Included in the 14-coin proof set and the 28-coin mint set are the very first entries into the America the Beautiful quarter program, the year's four Presidential dollars and the Hiawatha Belt Native American dollar. Also noteworthy is the inclusion of the very first newly redesigned Lincoln cent with a Shield reverse. The sets are rounded out with Jefferson nickels, Roosevelt dimes and Kennedy half dollars. 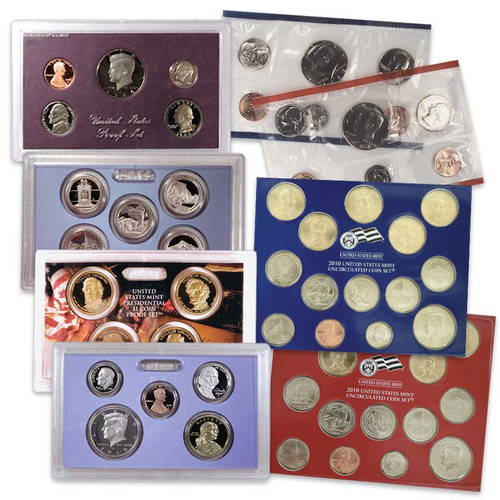