This copper-nickel half dollar proof was minted in celebration of the Mount Rushmore National Memorial's 50th anniversary. A portion of the proceeds from the sale of the coin helped fund restoration work of the monument. Its impressive engraving shows sun rays emanating from behind the colossal faces of Presidents Washington, Jefferson, Teddy Roosevelt and Lincoln. The monument's golden anniversary is noted on the reverse along with an image of an American Bison.

This collector's edition genuine legal tender $1 Federal Reserve Note is sure to delight anyone! Each note has been enhanced using the highest quality, precisionprinted colorization technique rendering Mount Rushmore, the American "Shrine of Democracy" in resplendent color. Each guaranteed Crisp Uncirculated note is housed in a blue folio and accompanied by a certificate of authenticity. 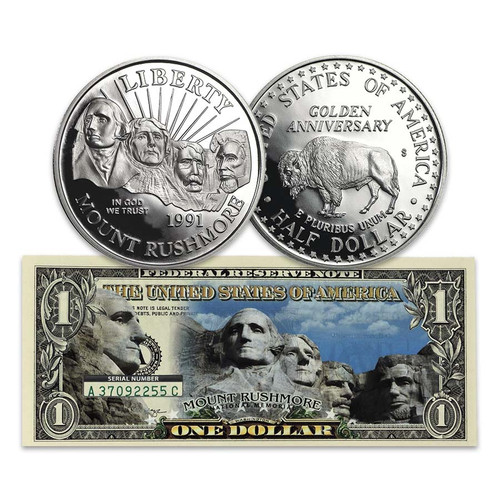