1992-D Olympic Baseball Silver Dollar Brilliant Uncirculated. Baseball had become an official Olympic competition when the U.S. Mint issued its first tribute to the American-born sport for the 1992 Summer Games. Although depicting a living person on a coin is illegal, the pitcher in motion bore a strong resemblance to a baseball cards depiction of Nolan Ryan. The U.S. Mint denied any outside influence on the designer, but the controversy certainly has added to this 90% silver issue's popularity. Over two and a half times as many proof issues were struck, making this Brilliant Uncirculated version a tougher find.

1997-S Jackie Robinson Silver Dollar Brilliant Uncirculated. This silver dollar honors the 50th anniversary of Jackie Robinson's acceptance into Major League Baseball. Robinson's professional career began in 1947 with the Brooklyn Dodgers; he was the first African American baseball player to break the color barrier in the Major Leagues. The obverse of this coin depicts Robinson sliding into homeplate as he did during the 1955 World Series. The reverse displays the Jackie Robinson Foundation's logo. 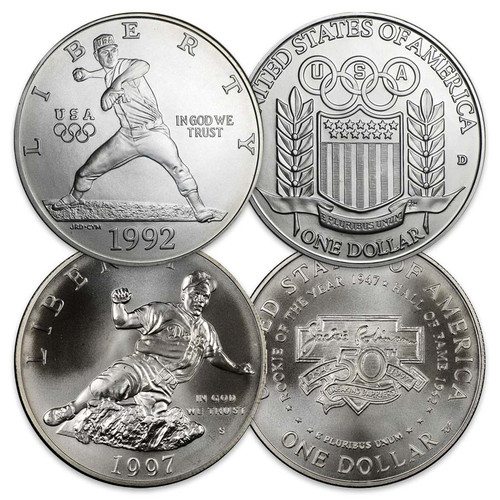