1994, 1995 & 1996 Proof Set Trio. These three mid-1990s U.S. proof sets had the lowest mintage totals in the 36-year span from 1960-1996. The 1994 and 1995 sets had mintages of merely 2.3 and 2.0 million respectively. The 1996 proof set, with a production of just 1.7 million, had the smallest mintage of the trio and continues to hold the record for the lowest mintage U.S. proof set since 1960. Struck by the San Francisco Mint, each boasts finest-quality minting. The double-struck engravings have a beautiful frosted finish that sets them off against dazzling mirror backgrounds. Each 5-coin set contains superlative cent, nickel, dime, quarter and half dollar proofs.

1998, 1999 & 2000 Mint Set Trio. The U.S. Mint released its last 10-coin Uncirculated set in 1998; the following year mint sets would expand to 18 coins with the inclusion of the State quarter series. The millennium introduced the Sacagawea dollar, pushing the number of coins featured in the mint set up to 20. Each of these mint sets features production numbers less than half the mintage of that date's proof set. 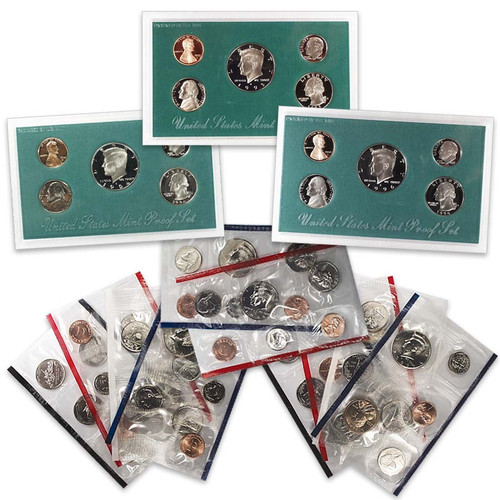