Bronze Civil War "Army & Navy" Token BU.  Dated 1863, this token features Lady Liberty wearing a Phrygian cap, a motif which is associated with freedom.  Thirteen stars, symbols of the original states encircle the rim of this bronze issue.  The inscription "ARMY & NAVY" fills the reverse of this Brilliant Uncirculated token and is surrounded by an asymmetrical wreath of foliage.

About Civil War Tokens: During the American Civil War, coin shortages became so severe that merchants began to issue their own tokens. Produced mostly from 1861-1864, these guaranteed authentic, privately minted copper pieces were the size and shape of the standard cent. Many included advertisements for a particular business, while others featured patriotic symbols or sentiments.   Civil War tokens became illegal after April 22, 1864 when Congress passed a law prohibiting the issue of any privately minted one or two-cent coins, tokens or devices used for currency. In June of that year, an additional law was passed that forbade all private coinage. 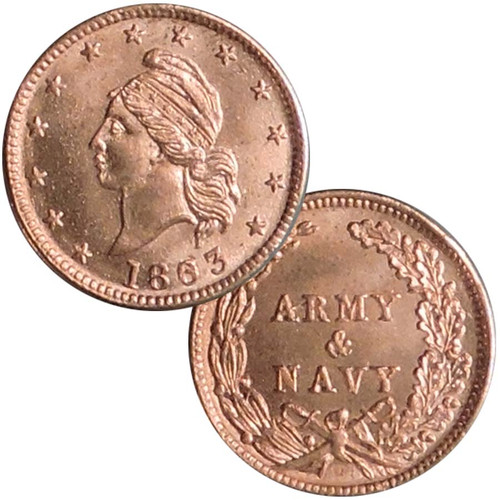