Bronze Civil War "Our Army" Token BU.  The obverse of this token is deliberately similar to that of the U.S. Indian Head cent. A Native American with a full feathered headdress is surrounded by thirteen stars on this undated piece. The words "OUR ARMY" are engraved on the reverse and encircled by an agricultural wreath design on this Brilliant Uncirculated bronze issue.

About Civil War Tokens: During the American Civil War, coin shortages became so severe that merchants began to issue their own tokens.  Produced mostly from 1861-1864, these guaranteed authentic, privately minted copper pieces were the size and shape of the standard cent.  Many included advertisements for a particular business, while others featured patriotic symbols or sentiments.   Civil War tokens became illegal after April 22, 1864 when Congress passed a law prohibiting the issue of any privately minted one or two-cent coins, tokens or devices used for currency.  In June of that year, an additional law was passed that forbade all private coinage. 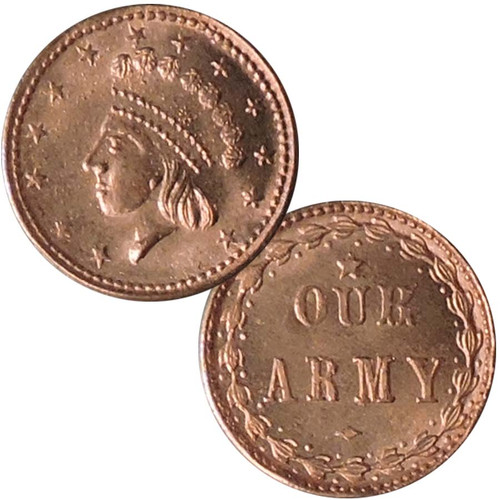