George Herbert Walker Bush had a long, illustrious career. He was a World War II veteran, an oil tycoon, a congressman and an ambassador to the United Nations. He served as Vice President to Ronald Reagan for two terms, ultimately becoming his successor as the 41st president of the United States.

This fantastic colorized coin and currency set honors his distinguished life and legacy. A colorized portrait of the president is featured on the obverse of a genuine 2018 Kennedy half dollar. The authentic $2 bill displays another portrait of Bush, along with an image of the First Lady, his beloved wife Barbara. Encased in an informative folder, both sides of the half dollar and $2 bill can be viewed through a protective plastic sleeve. A certificate of authenticity accompanies each set. 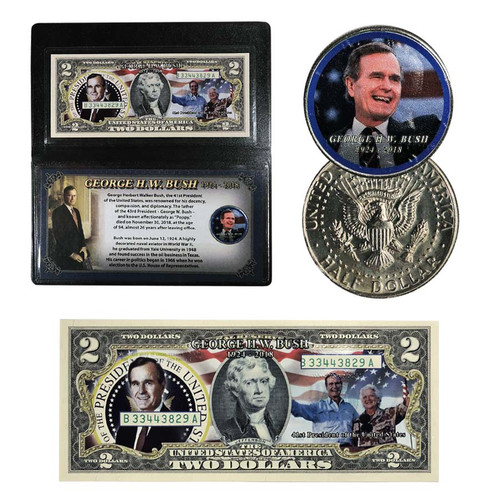