1994 POW Silver Dollar Proof. This patriotic issue commemorates the National Prisoner of War Museum in Andersonville, Georgia. Part of the National Parks System, it was built on the site of an infamous Confederate prison, to honor the sacrifices made by POWs from the Revolutionary War to Operation Iraqi Freedom. On the obverse is a magnificent eagle in mid-flight, having broken his chain of bondage. It is surrounded by barbed wire, symbolizing the plight of the prisoners. The reverse features a view of the museum.

2005 Marines Silver Dollar Proof. The first coin to honor a particular branch of the military, this coveted silver dollar celebrated the 230th anniversary of the Marine Corps. The obverse displays an engraving of the famous 1945 photo of Marines raising the U.S. flag at Iwo Jima. The reverse features the eagle, globe and anchor of the official emblem of the Marine Corps with the motto Semper Fidelis (Always Faithful).

2010 Disabled Veterans Silver Dollar Proof. This touching issue honors courageous American veterans who have made great personal sacrifice to defend our freedoms. Shown on the obverse are the legs, boots and crutches of three disabled veterans, with the inscription "They Stood Up for Us." The reverse includes a wreath of oak leaves representing strength and a forget-me-not bloom in remembrance of all those who have given much in war. "Take This Moment to Honor Our Disabled Defenders of Freedom," is engraved in the center of this finest-quality proof issue.

2011 Army Silver Dollar Proof. More than 30 million Americans have served in the U.S. Army since its inception during the Revolutionary War. This impressive proof celebrates the modern service of those heroes with an engraving of male and female soldiers in front of a globe. The reverse lists the Army's seven core values; loyalty, duty, respect, selfless service, honor, integrity and personal courage around the Great Seal of the United States.

2012 Infantry Silver Dollar Proof. This historic 90% silver dollar was struck to commemorate the legacy of the U.S. Army Infantry and the establishment of the National Infantry Museum and Soldier Center. Honoring those who are the actual boots on the ground in conflict, the engravings features a modern infantry soldier charging forward and beckoning troops to follow and the crossed rifle branch insignia of the infantry.

Please note that our modern commemoratives are not always available in the original mint packaging. 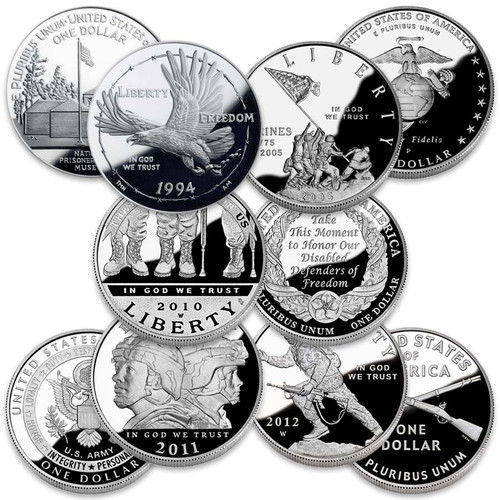