American Philippines 1907-1912 Silver Peso. Struck by the U.S. Mint as America governed the Philippines after Spanish rule, this magnificent silver peso features a beautiful woman with an anvil and hammer and smoldering volcano in the background. Although not a U.S. coin, this big silver issue displays an eagle and shield with the inscription, UNITED STATES OF AMERICA. The denomination ONE PESO and FILIPINAS is inscribed on the obverse. These uniquely bi-national issues remain in nicely detailed Very Fine quality. Our choice of date.

Philippines World War II Genuine Guerilla Emergency Notes, Set of 10. After the bombing of Pearl Harbor, Japanese forces invaded the Philippines and promptly issued their own currency, while declaring the Filipinos' money invalid. In response, emergency currency was printed by guerilla fighters and free provinces. These plucky freedom fighters exemplified the proverb, "necessity is the mother of invention" as the various peso denominations were printed using whatever paper and inks were available. If Japanese soldiers caught citizens with any amount of those emergency notes in their possession, they would pay the ultimate price and be put to death! 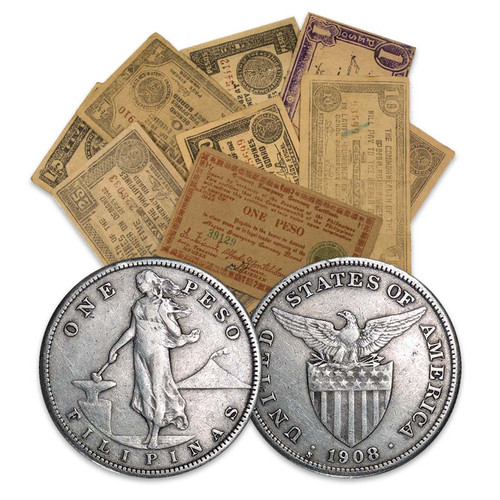