1982 George Washington Silver Half Dollar Brilliant Uncirculated. Until the 1982 George Washington silver half dollar took the collecting world by storm, there hadn't been a U.S. Mint commemorative coin with unique obverse and reverse designs issued since 1954. It was the first in an entire generation! The 250th anniversary of Washington's birth was deemed an occasion too important to pass up. Although both BU and proof half dollars were issued, less than half as many Brilliant Uncirculated coins were produced in comparison to proofs.

1986 Statue of Liberty Half Dollar Brilliant Uncirculated. These impressive copper-nickel half dollars were issued in 1986, to celebrate the 100th anniversary of the Statue of Liberty. This coin, the first U.S. copper-nickel commemorative, is a wonderful way to honor this iconic American symbol. Now over 30 years old, the obverse depicts a ship of immigrants steaming into the New York Harbor, with the Statue of Liberty greeting them. The city skyline can be seen in the distance. The reverse shows an immigrant family with all of their belongings, standing on the threshold to the American Dream. Issued in the year of the tremendous celebration for the Statue of Liberty's centennial. Sold as part of 2-coin sets with the silver dollar, they're tough to find individually today.

Please note that our modern commemoratives are not always available in the original mint packaging. 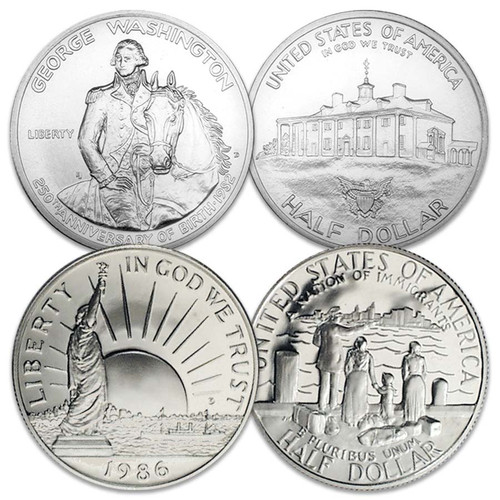