FREE U.S. SHIPPING AS A THANK YOU FOR YOUR ORDER AT THIS DIFFICULT TIME — To help slow the spread of COVID-19 the state of Vermont has greatly limited the scope of nonessential businesses. Currently, ICC is only able to ship a limited number of orders. You may also experience additional delays due to supply chain limits and order volume. We apologize for the inconvenience and thank you for your continued support.

Weighing scarcity against price, New Orleans Mint issues are relative bargains in the Morgan silver dollar series. Among 20th century Morgans, 1901 is by far the toughest date to find in mint-state quality. The total number of 1901 BUs surviving is less than half that of its closest competitor (the 1900 date). Of the three 1901 issues, only the O-mint New Orleans Morgan is still affordable in BU quality, with the P and S issues selling for four figures each. The impressive Morgans are housed in a transparent slab with official near-gem MS-64 grading from the NGC or the PCGS. 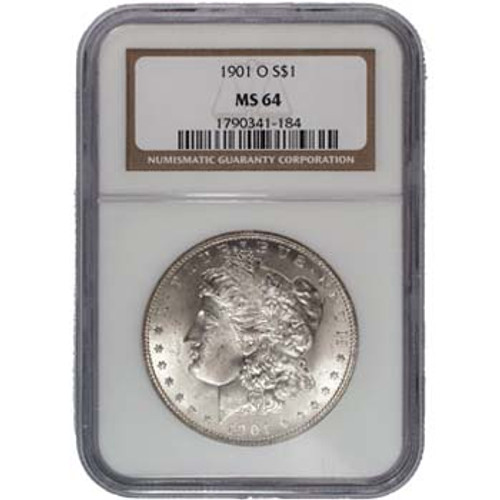