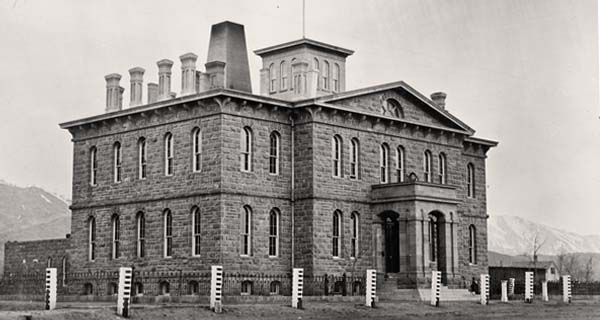 Although the Carson City Mint ceased operations nearly 13 decades ago, did you know that its original six-ton coin press is still used today? A stately sandstone behemoth, the long-defunct Carson City Mint still stands today and operates as the Nevada State Museum. On February 4th, 2020, the museum will celebrate a big birthday — the sesquicentennial of the first coin struck at the famed Carson City Mint.

In its brief 23 years of operation, the Carson City Mint produced gold and silver coins with a total face value of around $50 million. There is perhaps no other mintmark in numismatics that immediately conjures such nostalgic and romantic images of the hardscrabble Wild West than two little Cs stamped on American coins dated from 1870 to 1893. There is little doubt that some of these famously marked coins found themselves jangled around in the pockets of dusty miners and weather-beaten gunslingers, or thrown by the fistful onto tables by wily gamblers upping the ante, or plunked down, one by one, onto a saloon’s bar top by thirsty horse thieves.

The richest silver deposit in American history was discovered in 1859 near the town of Carson City, in the not-yet-a-state of Nevada. When news of the discovery reached the public’s collective ears, prospectors flooded the area. Boomtowns sprang up overnight, including Virginia City, where incidentally, a man named Samuel Clemens went to try his luck at mining but found he was better wielding a pen than a pickaxe. The Comstock Lode, as it came to be known produced several bonanza ore veins that from its beginning to its demise at the end of the nineteenth century output more than half of the United States’ supply of silver.

Everyone Needs a Mint

What to do with all that silver? Miners were still shipping their raw materials all the way to San Francisco for processing, which was costly, time consuming and risky. The need for a new branch mint was apparent; the powers-that-be had their own eureka moment and in 1863 — enter, stage right — the legislation authorizing the creation of the Carson City Mint.

However, the mint facility was slow to get off the ground, partly due to the nation being in the grips of the Civil War. Construction took several years to complete and the new branch mint’s first coin press did not arrive until 1868. It was not until February 4th, 1870 that the first coin was stuck sporting the latest fashion — the now-famous CC mintmark.

Seated Liberty dollars were the first to roll off the six-ton, steam-powered creatively-named Coin Press No. 1. Eight different denominations were produced at the Carson City Mint: dimes, the unpopular twenty cent piece, quarters, halves, Morgan and trade dollars as well as five, ten and twenty dollar gold pieces. From 1878 until its closing, Carson City only produced Morgan dollars.

All Good Things Must Come to an End

While the Carson City Mint enjoyed its own boom years, it never came close to rivaling the number of coins struck at Philadelphia, New Orleans or San Francisco. As mining operations on the Comstock Lode began to decline, Carson City’s production dwindled. In 1893, it ceased coinage, but its official Mint status was not withdrawn until 1899. Carson City then operated as an assay office until 1933, when its doors were closed for good…

…that is, until 1939 when it was purchased by the state of Nevada. Two years later, the Carson City Mint was transformed into the Nevada State Museum. Currently housing exhibits dedicated to Nevada’s cultural and natural heritage, a portion of the museum also pays homage to the time the building spent as a United States branch mint and is once again home to the original Coin Press No. 1. Visitors to the museum can still see the historic coin press in operation, as well as a just-shy-of-complete set of Carson City gold and silver coins.

In preparation for its big CC birthday bash, the museum has revived the revered Seated Liberty dollar, recreating a replica that is struck on the original coin press that is housed in the very same mint building made with silver mined in Nevada.

Festivities at the Nevada State Museum will be in full swing on February 4th, 2020 to celebrate 150 years since the first Seated Liberty dollar was struck in 1870. Visitors are invited to watch the museum’s special guest of honor, United States Mint Director David Ryder strike a new sesquicentennial silver medallion on Coin Press No. 1 to honor the occasion.

We hope that some of our readers will be lucky enough to attend and if you do, drop by our Facebook page and tell us all about it!