The clash of metal can barely be heard above the roar of the bloodthirsty crowd. Two ferocious gladiators kick up sand from the floor of the Colosseum as they battle to the death. For many, the phrase Ancient Rome conjures up images of not only the gladiators, but of Emperors, scheming senators and mind-boggling military conquests. This affordable ancient Roman bronze centenionalis hails from the time of Constantius II, the son of Constantine the Great. It is said that Emperor Constantius II admired the gladiatorial games so much that when coins were minted, he chose to use a depiction of the end of a gladiatorial bout. A portrait of the Emperor appears on the obverse. Housed in an informative folder. Coin design will vary as each was hand-struck centuries ago. 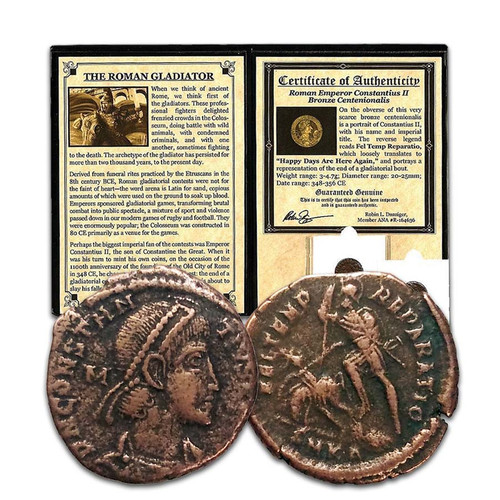