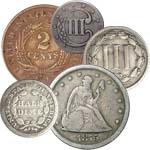 We've all heard the expression "phony as a $3 bill." Some folks might nod in agreement if someone said, "Phony as a 2 cent piece" or 3 cent, half dime or 20 cent piece. But they'd be mistaken, because these coin denominations actually were produced by the U.S. Mint and circulated in American commerce in the 19th century. Comparatively few moderns have heard of them, since they were made obsolete well over a hundred years ago.

Each has an intriguing story:

The 1864-1873 U.S. Bronze 2 Cent Piece. A bit smaller than today's quarter, the attractively designed 2 cent emerged in 1864, during some of the most horrendous fighting of the Civil War, as Grant and Sherman went all out to crush fierce Southern resistance. At the time, Northern morale was being severely tested and Lincoln's 1864 re-election was very much in doubt. To help bolster Union morale, the inscription "In God We Trust" (suggested by a minister and personally approved by Lincoln) appeared here for the first time in U.S. coinage, above a resplendent Union Shield (with 13 stripes for the original colonies, North and South). Abundant laurel surrounds the shield in tribute to the valor of the fighting men. Behind the shield two arrows cross over from each side, together with the suggestion of an olive branch. On the reverse is an agricultural wreath tied by a bow. Mintages of the 2 cent piece steadily declined until Congress ended the series nine years after its inception.

The 1851-1873 U.S. Silver 3 Cent Piece. This tiniest silver coin in our history, known as the "trime" or later "fishscale" (for its slender silvery look and light weight), was intended as a convenient payment for 3 cent postage stamps when the rate was reduced (yes, reduced!) from 5 cents. In 1854 its 75% silver content was increased to 90% silver and the coin further flattened to become the most featherweight type the U.S. Mint ever produced. Even so, large numbers were hoarded for their silver value during the inflationary years of the Civil War, after paper currency was introduced. Mintages dropped down to a very light number and soon ended altogether. The unusual obverse displays a six-pointed star enclosing the Union Shield. On the reverse the 3 cent denomination is creatively rendered by the Roman numeral "III" within a decorated "C" (the Roman numeral for 100). Very early U.S. cents had inscribed the denomination as "1/100" to help introduce Americans to the new decimal system in the nation's coinage.

The 1866-1883 U.S. Nickel 3 Cent Piece. Extremely hard nickel had been a critical component for armaments in the Civil War and the metal had been eliminated from U.S. coinage for the duration. With peace came a 3 cent nickel (actually only 25% nickel and 75% copper, the same mix as modern Jefferson nickels). Its Liberty personification wearing a fashionable tiara and period hairdo is one of the prettiest in U.S. coinage, a petite beauty within a very limited-size frame. On the reverse side a large "III" proclaims the denomination, as an agricultural wreath sealed with tidy bow provides an elegant surround. This nickel version proved a successful alternate in commerce after all the hoarding of the silver type. Following the U.S. postage rate drop from 3 cents to 2 cents, the denomination lost its rationale and faded into history.

The 1794-1873 U.S. Silver Half Dime. Tradition has it that First Lady Martha Washington donated her silverware for the first silver half dimes produced in 1794 (there weren't many). Its appearance actually came before the first U.S. dime production of 1796, but both had been authorized together, so there was some sense in the matter. A succession of fine Liberty obverses include the ardent 1794-1795 "Flowing Hair Liberty," the buxom 1796-1805 "Draped Bust Liberty," the matronly 1829-1836 "Capped Bust Liberty" and the final 1837-1873 "Seated Liberty," who holds the U.S. Shield in one hand and Liberty Cap (the ancient emblem of freed slaves) in the other. After much Civil War hoarding, the silver half dime fell into disuse and a new postwar 1866 nickel 5 cent piece emerged in much larger numbers, leading to the retirement of the half dime.

The 1875-1878 U.S. Silver 20 Cent Piece. This very short-lived denomination was chiefly struck in the Wild West, where nickels and dimes were not produced and merchants had difficulty making change. Not much more than a million were ever produced, so it's relatively scarce today, especially in mint-state quality. Another rationale for its introduction was to help boost U.S. exports: its 20 cent value was equivalent to that of the internationally traded French silver franc. The difficulty in U.S. commerce was that the 20 cent piece was only slightly smaller than the quarter, shared the same Seated Liberty obverse and a similar American Eagle reverse -- and was struck in the same silver content. To help assuage confusion, the 20 cent piece had a smooth edge compared to the milled edge of the quarter and the "Liberty" inscription of the 20 cent piece was raised higher (at least until worn down). But to no avail: it was quickly laid to rest.