When first introduced in 1979, this small dollar coin was intended to save the U.S. Mint production costs over the hefty Ike dollar and help extend the lifespan of more costly paper currency. However, the nation's first small dollar series was a flop, struck from just 1979-1981. It too closely resembled the quarter in color and size, and dollar bills were not phased out when the SBA dollar was introduced. Eventually, the coin found its niche within the mass transit and vending machine markets. Fast forward to 1999. In anticipation of increased demand from the aforementioned markets and to straddle the gap before the Sacagawea dollar was introduced in 2000, the U.S. Mint resurrected the SBA dollar once again.

Comparatively few of these pioneering issues struck for commerce remain today in Brilliant Uncirculated quality with original luster and absolutely no sign of wear (some surface scratches may be present, as is normal). Our complete 18-coin collection also includes all the limited-mintage proof issues in the series — even the key 1979 Clear S issue (estimated mintage just 360,000). We'll include a bonus album with the collection. Album may vary from one shown. 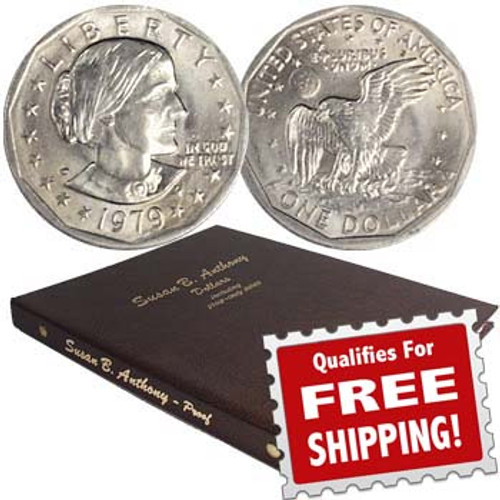