It is not often that a coin series overlaps, with one ending in the same year a new design begins — resulting in two completely different coins of the same denomination sharing the same date, but 1909 was just such a year. It marked the 50th and final year of the Indian Head cent series, and ushered in the new Lincoln cent that celebrated the centennial of the beloved president's birth.

These historic coins are the first and last of their respective outputs. The mintage of the 1909 Indian Head penny was just a fraction of America's population at the time, so comparatively few were in circulation. Those coins were worn heavily, then a good number were destroyed in melts after a recall. The first few Lincoln pennies carried the designer's initials of VDB, but were quickly revised after just three days. The penny included here is one of those corrections, the first in a long line of modern Lincoln pennies that continues to this day. 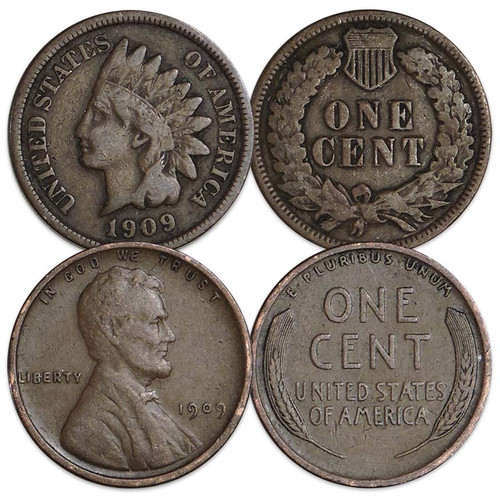