When the U.S. Mint introduced special commemorative U.S. silver half dollars and dollars in the early 1980s, they were sold individually and as part of Prestige Proof Sets. But most collectors bought their commemorative silver proofs individually. And most proof set buyers continued to acquire regular 5-coin sets each year. The result is that Prestige proof sets have become BY FAR the scarcest form of these coins.

In 1992 about half a million of each of the Olympic Baseball silver dollars and Olympic Gymnastics half dollars were sold. And 2,675,618 regular 5-coin proof sets were produced. But only 183,293 Prestige proof sets were issued, containing all seven proof coins. Today the 1992 regular 5-coin proof set and that year's commemorative proofs would sell for a combined price higher than your cost for this much scarcer set. 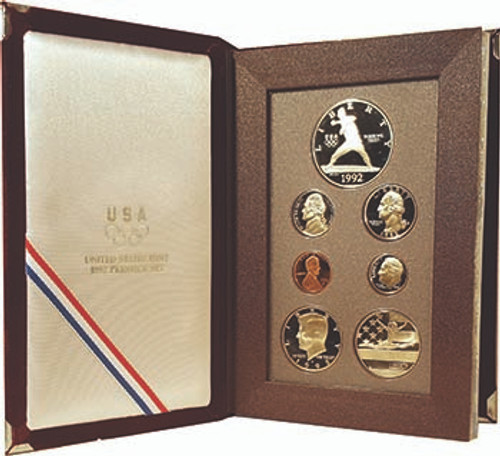